That's a wrap! The Lloyd's Lab may have drawn to a close but the Rapid Appetite Indicator keeps on giving.

Today was Demo Day for Cohort 4 and starting the morning off was the Data and Models theme, which meant our team was up bright and early to demo the RAI prototype to the London market audience.

Alexis Renaudin, Head of Data at Artificial, led proceedings - but not before a welcome introduction from the Head of Data Innovation at Lloyd's, Craig Civil.

'Artificial took the opportunity of the Lloyd's Lab to create something entirely new using their existing tech, in a way I believe could be very beneficial to Lloyd's and the wider London market,' Craig explained. 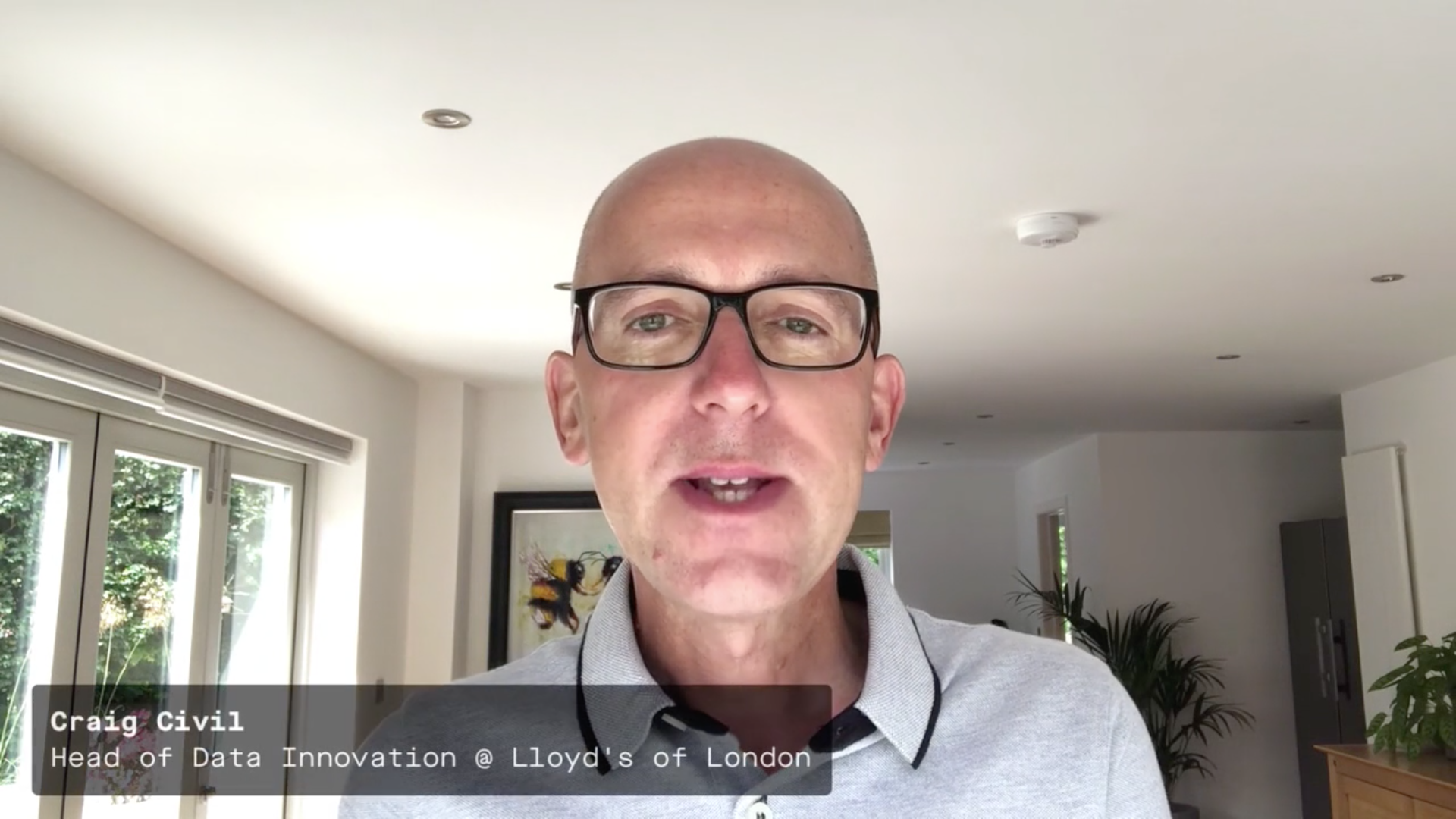 Alexis began by talking the audience through the main challenge we wanted to solve during our time in the Lab. A common issue we hear from our clients is that underwriters can spend up to 80% of their time saying 'no' to potential business.

Looking at typical submission volumes, the team realised that a good proportion are outside of immediate appetite - this could be because of simple reasons, e.g. the risk being in a certain country, or not meeting the minimum requirements for the underwriter.

A smaller proportion of submissions received are in a 'grey area', where they are in appetite but end up declined because of more complex considerations. The smallest proportion of risks are the ones the underwriter actually wants to say yes to. 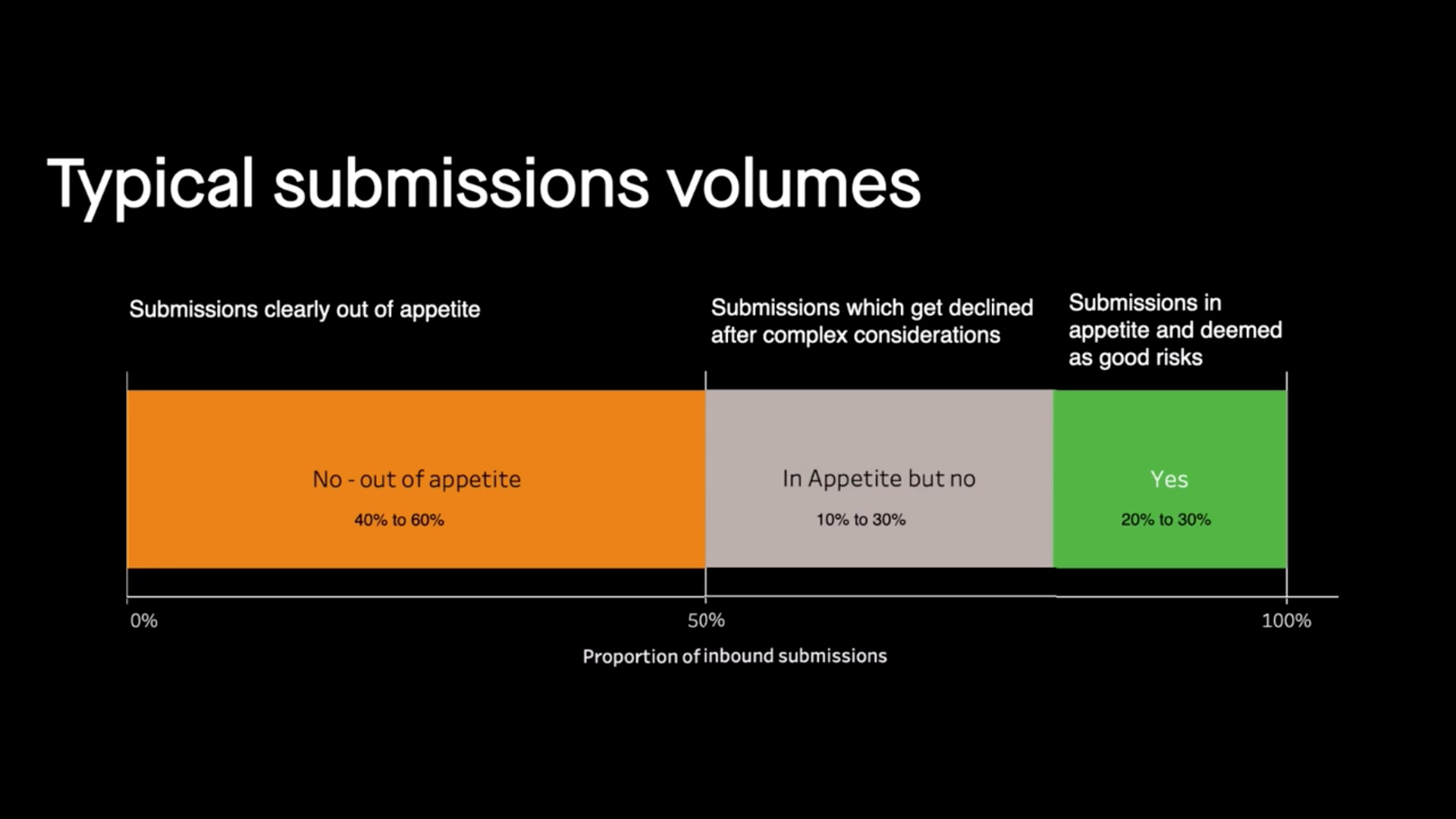 Alexis explained that the team wanted to remove friction from this process and automatically identify the portion of risks that are outside of appetite, saving time and effort for the underwriter.

What if a broker could email a submission to any underwriter and get a simple yes/no indication of risk appetite in less than ten seconds?

Here's where the RAI comes in. Our tool works like this:

1. Extracts data from the email sent by a broker to the underwriter to identify the core characteristics of the submission

2. Enriches it with relevant external data via API

3. Feeds this through the appetite decision engine which is configurable by the underwriter to match and reflect their own risk appetite

4. Gives a yes/no response which is sent via an automated email to the broker within seconds, along with the rationale if the answer is ‘no’ 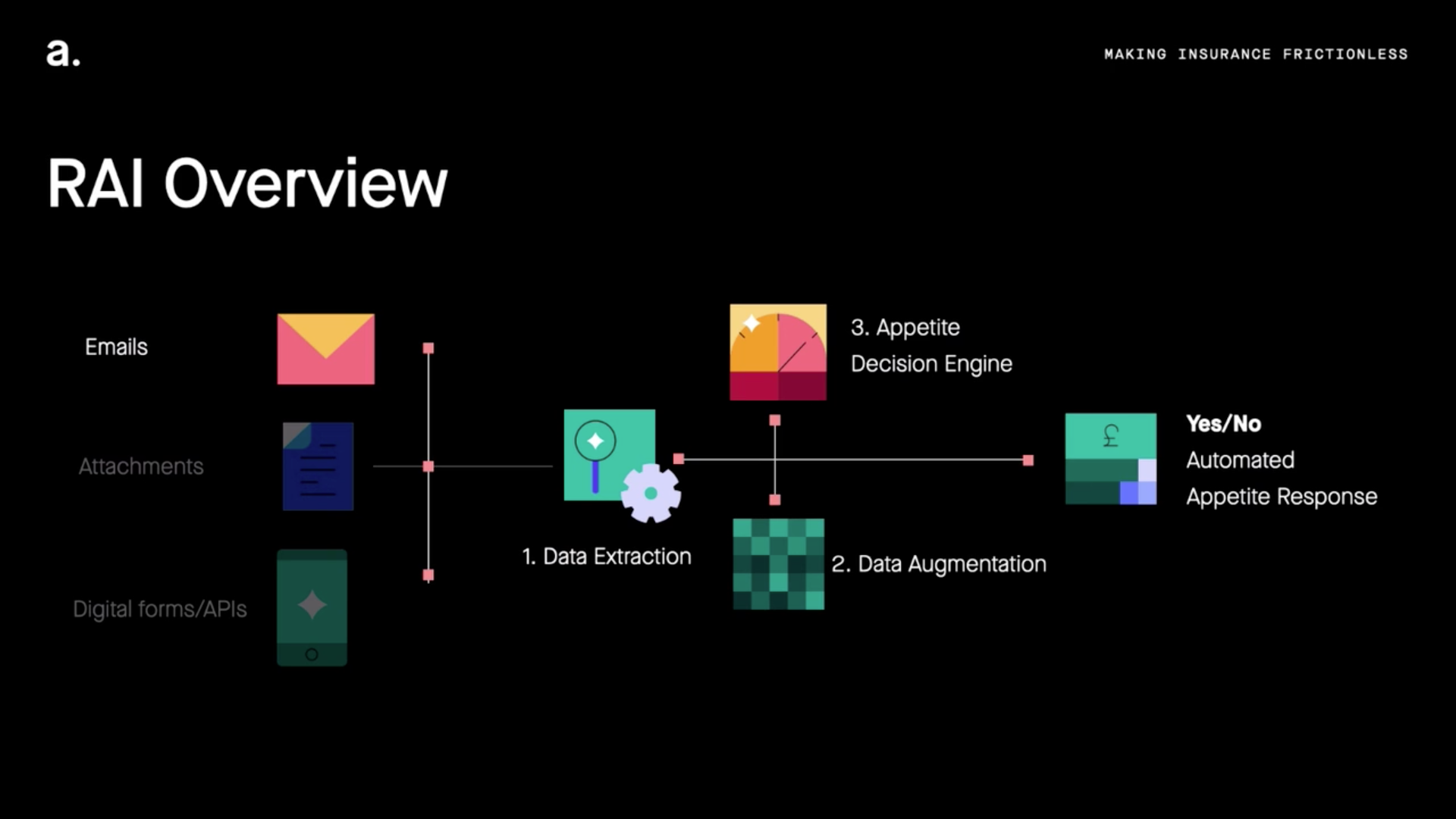 For the tool to become real and usable for the Lab, we had to choose a line of business to work from. The tool could be used for any line of business, but in this instance we chose Marine Hull. For more information on the background behind our decision, read our previous article on the Lab here.

We also needed to choose a relevant external data set to augment the information sent by the broker. In Marine Hull, the data that drives the quality of a submission are the different characteristics of the vessels. Getting access to an accurate source of information around vessels was therefore crucial.

Through the Lab, we were put in touch with a company called Informa who produce the Lloyd's List Intelligence, a widely used data set on the market. They kindly gave us some access to their Maritime Intelligence API.

For this implementation of the RAI, we were then able to extract the unique IMO numbers attached to each fleet from the broker's email and get back, via the API, the vessel’s characteristics that our engine needs to automatically triage the risk.

Alexis was then joined by two of our Lloyd's Lab mentors: George Roberts, assistant underwriter at Sompo International and Ben Underwood, Marine Broker at BMS.

George first showed the audience how the RAI is easily configurable to hide or include certain conditions; in this example, he set the conditions to 'does not contain CBO (chemical tankers) or OYT (yacht)' occupancy vessels and chose limits for DWT (deadweight tonnage) to reflect the way he usually looks at incoming submissions.

The final step was to write a 'fail message' that is sent to the broker when these conditions are not met, giving him all the necessary information to communicate the decision to his client or to come up with a different strategy (e.g. insuring part of the fleet on the local market). 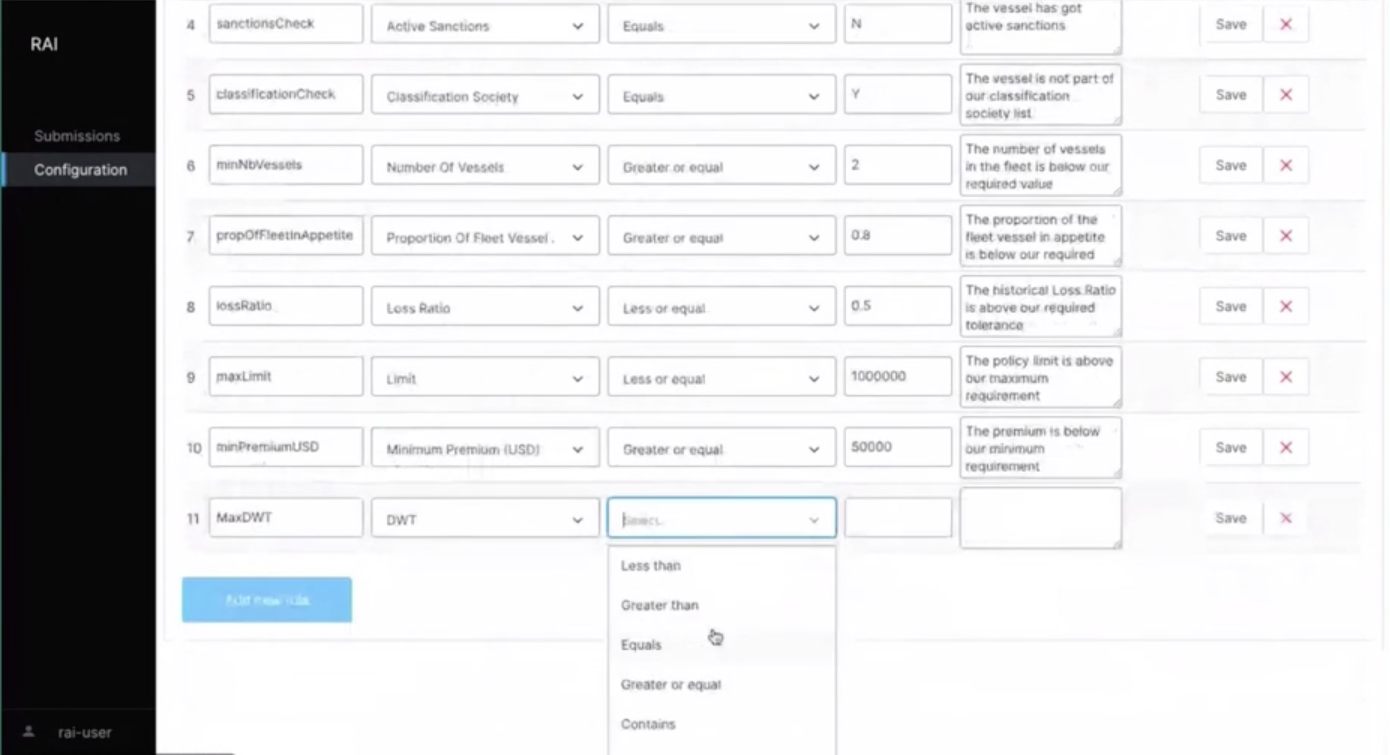 Appetite configuration page of the RAI

Ben from BMS then gave the audience a live demo of an email submission using the RAI tool. After showing us the kind of information he would normally send to the underwriter -  company name, cover needed, IMO numbers, limits, total premium per year and total claims - he sent the email to George and received an email back within ten seconds. In this instance it's a no, and George showed how the tool gave a clear indication of the conditions that weren't met.

After the demo, Ben gave us his thoughts on the RAI.

'With this kind of product it will help me from the broking side, especially if I'm time-pressured, to quickly speak to a few markets and be able to understand who to talk to and who not to bother, and will then give me the reasons to tell the client if we're unable to place a piece of business as to why. It will also give me the impetus that if I know it's within appetite then that kind of discussion is worth having and doesn't waste our time.'

And from the underwriting point of view?

'It saves us valuable time and effort because we can instantly and automatically triage the risks that we want to see and the risks we don't want to see, so we're not wasting Ben's time or our time by reviewing fleets that aren't ever going to be in appetite for us,' said George.

The future of RAI

The next logical step, as Alexis explained at the end of the demo, is to gather data from not just the body of an email but also its various attachments. This is a feature the team at Artificial are already working on in a separate capacity and will allow the RAI to automatically gather data points from files such as Loss Runs or Statement of Values, whether in Excel, PDF or image format.

The work we did in the Lab will continue, too: 'We will work in keeping those relationships made during the programme for further product development and enhancement,' said Alexis.

Eric Joost, non-executive director of Artificial and Chief Technology & Global Markets Officer at CAC Specialty and former Global Head of Property and Casualty for Willis Towers Watson, rounded out the presentation with some encouraging words on the benefits of the RAI technology:

'We're using Artificial technology [...] in a way that complements what human beings are trying doing in this space, and allows the brokers to focus on what they're most effective at - making a market, offering insight, negotiating tactically - and the underwriters to get better at sifting through many, many opportunities and actually focusing their risk decision making on the opportunities that are most valuable to them, and doing all of this at speed.

'The future, if we lead and pay attention to things that need to go on in a granular way, is very very exciting.'

So what was the biggest takeaway of the programme?

'It is crucial, even for the best technology, to be trialed in practice and in context, and having access to market participants was invaluable in terms of getting feedback and actually delivering value,' says Alexis.

If you would like to watch the demo presentation, you can see it in full here.

For more information on the Rapid Appetite Indicator, or to share any other use cases that you might have, please email alexis.renaudin@artificial.io.

We build superior products that harmonise the insurance experience for you and your customers.

Find out how we can help your business →